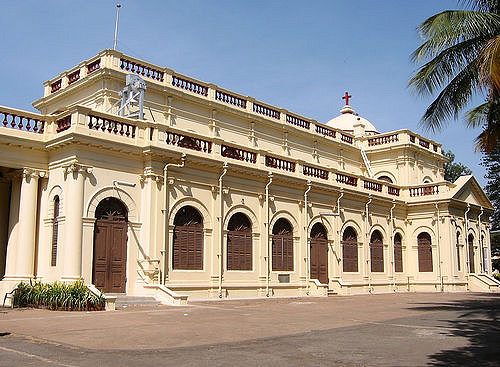 St. Marks Cathedral was a beautiful old British church which stood tall at the entrance to the famous Bangalore M.G. Road, across the street from Queen’s Park. It was the CSI flagship church. The church hosted many of the elite Bangalore Christian families who regularly worshipped there. Bishop Cottons girls and boys schools were affiliated with it and boarders regularly attended the Sunday morning service. Vishranthi Nilayam and UTC had affiliations too. (Please read the very interesting history of this beautiful church in the article below.)

My maternal grandparents started attending it in the mid 1960s when they moved from Delhi to Bangalore. My parents became members of St. Marks the year after they were married. This was the church I was born into, baptized, confirmed, and married in.

My memories are of the absolutely heavenly music, Professor Sebastian played on the grand pipe organ and the choir joyously singing hymns under Uncle Sugirtharaj’s tutelage. And, I cannot forget Anand Uncle proudly carrying the cross down the aisle each week. But, I also remember the service from the Book of Common Worship being repeated innumerable times that it felt very boring and often made me mindlessly say them – though in and of itself it was beautiful and meaningful. The Sunday school was set for elementary school aged kids. We sang the usual joyful songs, learned a Bible hero story and colored our papers in the parish hall. Except for my grandpa who was in leadership, the rest of us were pretty much Sunday Christians.

Now looking back, it was a beautiful church but I am heartbroken to say that as far as I can remember, I don’t remember the gospel being preached at all through my 22 years there. I have been away from that church since our move to the U.S. 30 years ago. I wonder what Jesus would say about it today? It has an interesting history of being built and collapsing many times – is this a significant reflection of the spiritual reality of the church? Praying that it would be free of the chains of worldliness, legalism, morality and corruption to stand as a bright gospel light in the city of Bangalore.

It’s not a church that matters but it’s the worship of our one true God! It’s the truth of the Gospel which gives us eternal hope and life. I have since learned that salvation is by grace alone, by faith alone, not by works so that none of us may boast! For God loved the world so much that He gave His one and only Son, so that everyone who believes in Him will not perish but have eternal life. ~John 3:16

The Church That Kept Rising From The Ashes

After the fall of Tipu Sultan, the British made Bangalore their headquarters in South India. Obviously, there was need for a chapel in the cantonment and in 1807, a spot was chosen midway between the fort and the farthest barracks in the Cantonment for it. This spot of land also happened to be the highest spot of the table land of Mysore. In 1808, work on St Mark’s Cathedral started and it was completed in 1811. The church was opened for worship in 1812 (this accounts for the confusion over 1811 and 1812 as the date for the inauguration of the church). It was consecrated by the Bishop of Calcutta in 1816.

Named after St Mark, believed to be the first gospel writer, the church was built to accommodate about 400 persons. It was 100 feet in length, 53 feet in width and 20 feet in height. The first building was a simple one. It was a plain, rectangular, low-roofed structure with the font placed in the west verandah to maximize space inside. Reverend Frank Penny, historian of the period, described it as “one of the ugliest buildings ever erected, looking for all purposes like a Bryant and Mays matchbox.”

The initial years of St. Mark’s Church were beset with problems; the building needed extensive repairs within a few years. By 1836, the worshipping population shot up to about 2000. There were several structural damages to the old building as well — the font built of brick and lime in the western verandah cracked. The congregation demanded a better church; worshippers were eager to have a belfry in which a bell could be hung and rung.

Additional funds were demanded from England and it was reported that ‘the church was saved from the unredeemed ugliness by getting additional funds from the church society in England for a tower or a belfry’. This was completed in 1856. In 1859, the St Mark’s Church committee wanted another extension of the building. It was proposed to raise the roof and add a chancel. Work started in 1863 but had to be abandoned as the government needed funds for new bar­r­acks. By this time, the church had fallen into a state of disrepair in anticipation of a further enlargement.

There was a further expansion in 1902. The garrison Anglican Church was enlarged and the seating capacity rose to 700 because of a new building which was constructed in August 1902. The renovated church was dedicated on August 26, 1902, by Bishop Whitehead of Madras. However, this new church building collapsed, and had to be rebuilt in 1906.

The church has beautiful colonial style architecture. It is modeled on the lines of St Paul’s cathedral in London. The church has a dome, a semi-circular chancel and roman arches. The entrance of the cathedral has intricate woodwork with elaborate carvings. The bell one of the best maintained in India. The stained glass in the windows was made by Sreenivasulu Naidu and Sons of Madras.

The pulpit is made of Italian marble from Genoa. Bishop Tubbs of Palayamkottai was the first to preach on the marble pulpit on July 1, 1928, delivering the sermon ‘The reunion of Christendom’. A brass lectern which has an eagle with its wings spread was presented by planters in Mysore in 1903.

The military character of the church is evident to even the most casual of observers. The walls of the church are dotted with several plaque and colours of regiments. The military colours of the 77th Moplah Rifles after disbandment is buried on the west wall of the church. There are numerous plaques, dedicated to the officers and men who lost their lives. The cause of death in many of the cases makes interesting reading; in addition to war, disease and being mauled by wild animals appears to have taken its toll on the British troops. It is interesting to note that the oldest plaque is dated April 1808; perhaps the plaque precedes the church.

The church became a part of the Church of South India in 1947. It went on to become the Cathedral of the Karnataka Central Diocese in 1961. It still retains one last link with the military. Special services are held for commemorating the martyrs who laid down their lives in the service of the nation on Remembrance Day. A defence band plays on this occasion, with top officers in attendance. It is perhaps a fitting tribute to the unknown soldier.